Pulsars are rapidly rotating neutron stars, whose magnetic axis is inclined with respect to its rotation axis. A neutron star is the very compact (10 km radius) left-over of the core of a massive star (10 to 100 solar masses), when this star explodes as a supernova at the end of its life. At the time of the explosion all the fuel for the nuclear fusion processes has been exhausted, and the core of the star consists of iron, the most stable element. Since energy production by fusion dies out, so does the high pressure which so far had counteracted the weight of the stars outer layers. As a consequence, the star collapses rapidly onto its centre, but the colliding gas layers bounce back, some nuclear fusion processes can ignite, and the star becomes a bright as an entire galaxy: a supernova.

What is left-over from such a catastrophic event, is a black hole or a neutron star, formed from the matter of the star's central region. In a neutron star, the iron nuclei are squeezed together to form what is essentially a plasma of neutrons. Like a figure scater doing a pirouette spins faster when (s)he brings the arms close to the body, due to the conservation of angular momentum, the collapse of the slowly rotating progenitor star results in the neutron star to spin with periods of 1 second and faster.

During the final collapse, the magnetic fields of the star are also squeezed into a small volume, thus the field strength at the surface of the neutron star is extremely high: about 1010 Tesla, while our Sun has a field of about 10-4 Tesla! Because of the rapid rotation the rapidly changing strong magnetic fields induce a huge electric field of about 1011 V/m, which easily overcomes the gravitational pull on charged particles, and electrons and positrons are pulled away from the neutron star's surface. As charged particles can only move in a spiral path around and along the curved magnetic field lines, they are pulled into higher regions of lower density. Their curved path also causes them to radiate electromagnetic waves which comes out in a narrow cone parallel to the magnetic field lines. Thus the radiation is concentrated in a direction of the magnetic axis.

If the magnetic axis is inclined with respect to the rotation axis, the neutron star sends out beams of radiation, from its magnetic north and south poles. Due to the rotation, the beams point to two large circles in space, just like the light beam of a lighthouse. 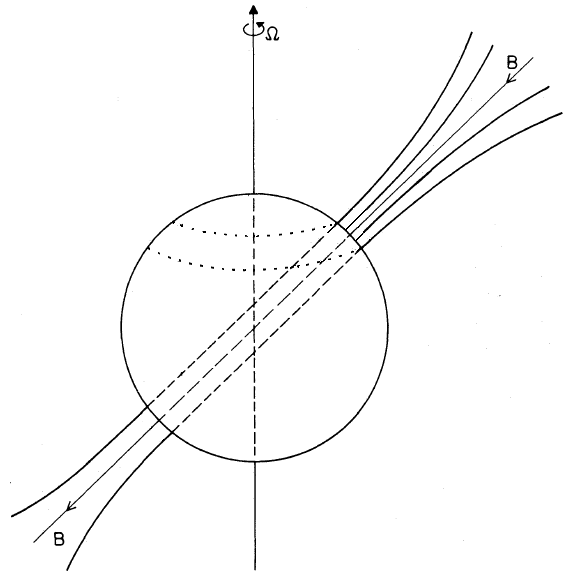 Schematic sketch of a neutron star rotating about the Ω-axis, but with an inclined magnetic axis, indicated by the field lines B near the magnetic poles. Electrons and positrons move along the field lines and produce beams of radiation in both directions of the magnetic axis. The star's rotation takes these beams around (adapted after Ruderman and Sutherland, 1975).

If our Earth happens to be in a direction towards which this beam may point, we observe a periodic flash of radiation: a pulsar. A famous pulsar is in the centre of the Crab nebula:

Jodrell Bank Observatory has a very nice collection of the Sounds of Pulsars.

Observations: Scintillations of B0329+54

On their way from the pulsar to the Earth, the radio waves pass through the interstellar medium, which contains clouds of warm and hot plasma, which strongly influences the radio waves. Refraction causes them to change their direction. The radio flux that arrives at Earth is the result of the superposition of waves that are affected in varying degrees. Thus the measured flux depends on the situation in he interstellar medium along the line of sight to the pulsar. The movement of the pulsar and of the plasma clouds causes the radio flux to flicker, in the same way as the turbulent motion of air packets in our atmosphere causes stellar light to flicker.

This causes the signal from the normally bright pulsar B0329+54 to become much fainter for times, which makes testing and optimising the receiving system quite challenging. Here is a waterfall showing what happened during 10 hours on 26 oct 2015: for one hour around UT 15:00 the pulsar B0329+54 was exceptionally strong. At other times it changed between a reasonably good signal and being buried in the noise. Although this diagram is done with too short a period, which causes the line of the pulses to drift to the right, one can easily follow the coming and going of the signal: 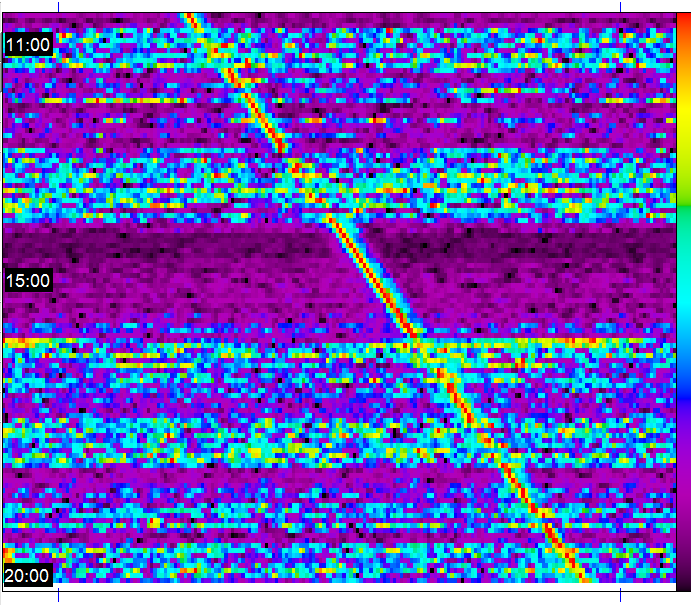 B0329+54 can be used to study scintillation, by continously measuring its signal, and observing the time variation of the strength of the pulse with respect to the noise. This is done for several days in autumn 2015, during which all instrumental details are kept unchanged. The data is sampled at 40 kHz, but averaged over 80 data points, so that the data are recorded with a rate of 500 Hz, which makes smaller file lengths. From 1 minute sections of the raw data, phase diagrams are computed and the ratio of the height of the highest peak to the standard deviation of the background around this maximum is taken as the signal to noise ratio.
From the entire data set the strong variation of the signal to noise ratio is apparent. It can vary between about 20 to close to 1.

During a time span of 12 hours, the pulse may be present for a few minutes or as long as an hour, only to suddenly disappear in the noise.