The Sun with its planets is but a small, ordinary star among the 10000 million other stars that make up our Galaxy. What we see of the Milky Way as a brightish band across the sky - if we look at it from a very dark place - is the light of all these stars. Almost all of the stars are located in a disk which rotates around the Galactic Centre (in the constellation of Sagittarius). At radio wavelengths the Galaxy looks somewhat different: 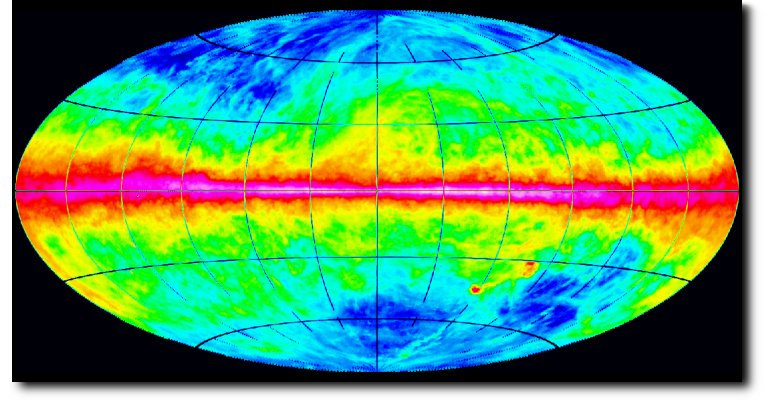 The band along the galactic equator is narrower and the radiation does not originate from stars, but from the gas which fills the space between the stars, and out of which stars are formed. This interstellar gas comprises several components of different temperatures. There is thin and very hot gas of several million Kelvin, which had been produced by exploding stars; there is warm and cool gas in ionized and neutral form, and clouds of cool (10 K) and dense gas, which contains a great diversity of molecules and out of which new stars can be born.

Ionized gas produces radio radiation as a thermal continuum and also a non-thermal continuum when electrons are deflected by the interstellar magnetic field into circular and helical orbits.

Neutral and molecular gas shows line emission from the characteristic spectral lines of the atoms and molecules. A special role is occupied by hydrogen because of its high abundance of 90 percent of the atoms of normal matter. The proton and the electron which moves around it both have an internal angular momentum, the 'spin'. When an hydrogen atom finds itself in a state where both spins are oriented in parallel, after a collision with another particle, the electron re-orients itself to the energetically more favourable anti-parallel orientation by radiating the excess energy in form of a radio wave at a sharply defined frequency of 1420.405751 MHz - which corresponds to a wavelength of about 21 cm.

The Solar System is located in about Ro = 8.5 kpc distance from the Centre, and moves approximately on a circular orbit with a velocity of about vsun = 210 km/s. In the 21 cm line of hydrogen one can observe clouds of neutral gas everywhere in the Milky Way, and from the Doppler shift of the line one can measure the radial velocity. Thus it is not only possible to map the interstellar neutral gas of the Galactic Disk, but also to measure the rotation of the disk.

In a JavaScript tool we can display graphically the above formula, and thus show in the Galactic Plane those regions, in which gas clouds are seen from the Sun (yellow circle, rsun = 8.5 kpc) with positive or negative radial velocity:
Rotation curve
Vrot(r) = Vsun + dvdr*(r-rsun)
Vsun [km/s]
dvdr [km/s/kpc]

solar orbits appear to us at zero radial velocity, which makes the interpretation of these spectra more difficult.

Since for any lines of sight that pass through the interior of the solar orbit, viz. 0°<l<90° and 270°<l<360° the radial velocity has a maximum value, it is possible to measure the rotation of the Milky Way: Maximum radial velocity vmax have clouds which are located where the line of sight touches the circular orbit for which it is the tangent. At galactic longitude l one measures the rotational velocity for the radius R = Rsun sin l:
v(R) = vmax + vsun sin l

Using the 9 m dish, we conducted a sky survey in the light of the 21 cm line. The observations were done by drift scans: The telescope was pointed to a fixed position and for the next couple of hours spectra were continously recorded of those regions which pass by. From the known pointing position and the time the galactic coordinates of every spectrum is computed. The reduced spectra are added to the corresponding bins in longitude and latitude, so that one obtains an average of 100..600 spectra for each position.
To the visualization tool